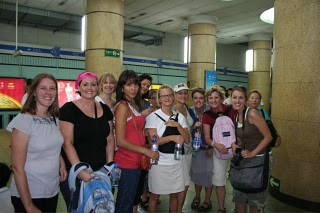 I am now in Bejing with a group of volunteers to work with several of our projects dealing with womens issues. When working in the area of poverty alleviation, the symptoms of that problem are to many to count. In China over 6 million women are involved in prostitution due to human trafficking and lack of educaton. We heard stories of girls being sent into prostitution to pay for their brother to get through school. Husbands sending their wives into prostiturion and holding their children as hostages and one girl even being put in a pot of boiling water to kill her, but since she survived she was told that she was strong enough to be allowed to live but could never be anything but a prostitute, by her own mother. The sights and sounds of Bejing and the other towns we are heading to are frought with the despair of these womena and also the hope we see as they work in the businessed we are helping to develop.

One thought on “> Bejing Bound”