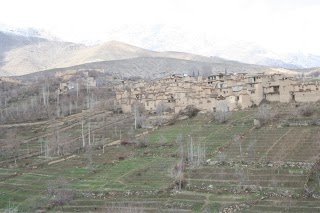 As we climed further and further into the mountains outside of Kabul we finally reached Istalif. We all fell in love with the beautiful area and mountain village. Istalif, an hour's drive north of Kabul, sits in the heart of the broad, fertile Shomali Plain, once considered the breadbasket of Afghanistan. The village, formerly surrounded by lush orchards, was home to a bazaar with 1,000 merchants.Istalif managed to survive Afghanistan's war with the Soviet Union. But when the Taliban arrived, the Shomali Plain turned into the front lines. By 1999, the Taliban forced hundreds of thousands of people from the region and destroyed their farms, shops and homes. Now, in the wake of the Taliban's collapse, the villagers — along with record numbers of refugees around Afghanistan — are starting to return, hoping to rebuild what was lost. The village is inhabited by the Tajik people. They are famous for rugs, pottery and embroidery, but first we visited a medical clinic where over 100 people are seen a day. The clinic is making a huge differeence in this village.