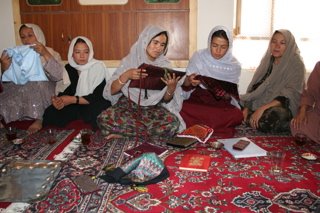 In many areas of the world we work in, we use a similar model to the one being used by ORA International. Women coming together in small groups and electing two to represent them in a cluster association and then forming committees and teams to eventually form an association. This way women have a greater voice together than apart. We visited two different cluster groups representing about 18 groups each. Many arrived in burquas. These groups are part of the 45 groups that have been developed representing about 800 family units and almost 4500 individuals. On this morning one of the facilitators was talking about having been beaten by her husband because she is working with the women. We noticed that her speech indicated her jaw had probably been broken in an earlier beating and set without medical treatment. We were angered, but know this model is a slow but sure way to empower even though outside interference could get her and others killed. These women were determined to keep coming and keep working towards a common goal. This was the day I was taking a survey of their skills and abilities to begin the economic portion of the training. They were so excited about seeing what I had purchased from the marketplace and other artisans and many of them have the same skills. I asked sach of them to pick up the product that I brought that most represents the work that they know how to do. They were all so excited as they shared with each other and me and curiously investigated the wares. The next step is in two weeks they are to bring back a sample of the item they said they could make or any other items from their groups to be photographed and emailed to me. This is the part where we begin to talk about starting businesses and quality. A very long process but oh so worth it when I see how excited they are and how hope is in their eyes.